Why Women Do Not Compete in Coffee Competitions 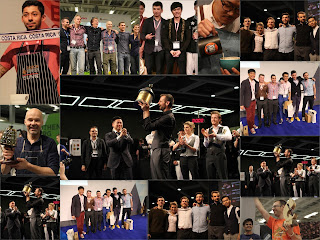 Man is born free, and everywhere he lives in chains", the opening lines of Rousseau's 'The Social Contract' is all about how man is born naturally good, but gets corrupted by our society and institutions. Basically, our social constructs form who we are, without us even being aware of it. It is part of us and it shapes us.

Rousseau was all about how we can go back to our free and good ways as individuals in nature, quite literally, and by 'we' he meant 'men'. As for women, his main ideas can be summed up in this line from Emile "Do not permit them an instant of their lives free from bondage". And so it's a little strange to mention him in an article about social construct and the success (or lack thereof?) of women in coffee. But I feel his statement of living in chains works well within the subject.

Why? This question has been brought up many times, mostly by men, and especially by Nicolas Cho and Gwilym Davies. They have received both criticism and praise alongside questions as to why this would or could be the case. 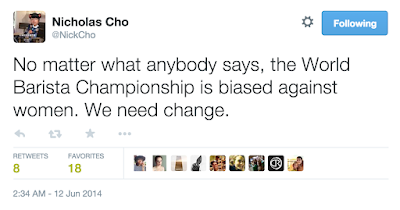 Searching for answers on a scientific level
But real answers have not been brought forward. Even speculations have been sparse. Now without claiming I have all the answers, I wanted to put forth my thoughts and opinions after doing some research in social and gender science.

Are women underrepresented?
First things first though. Is it really true women are underrepresented in coffee competitions? The answer simply is yes. If you look at the data for the World Barista Championships, available on their website, you can see this quite clearly with the percentage of participation always under 25%.

...And is this a bad thing?
One question following this fact is Is this a bad thing? Yes, it is. Winning a competition means stature and influence. A short documentary of Prima Coffee, interviewing past winners highlights this as well.
It means better wages and positions. It means carrying women into higher paid positions on a bigger scale. Work is often defined in gender terms. For example more expensive restaurants are more likely to employ men, while lower-priced restaurants tend to hire women (Reskin and Bielby). And we see this gender difference in specialty coffee as well. The more nerdy the store, the more men work there. The more cafe-on-the-corner, the more women there are to steam up the milk. An interesting article on this subject can be read here, in the Guardian: "A study found 58% of 'bar attendants and baristas' were women, but men were 2.5 times more likely to reach the highest tax bracket in that occupation'".

Self fulfilling prophecy?
Even if the answer is yes, do we want to focus on it? Because if we focus on it, are we not making things worse? By saying women are not competing as well as men, is this not a self-fulfilling prophecy? Reading James Hoffman's blog post, especially the part quoting Annete, one could say yes, it is. And personally I am not a fan of calling out a high ranking female competitor for being female. Who cares if you are the highest ranking female? The point is to understand why, in general terms, women are not competing as much as men and why, when they compete, they do not seem to win.

Although many people have written about women in coffee, not a lot of them have read up on social and behavioural science to see if we can find a genuine cause. I feel if we, and with we I mean the entire specialty coffee community, understand why this is, we can change it.

So what it comes down to is,

These are the questions I will try to answer.

Unfortunately, the figures show something different. To summarise the experiments held by Gneezy, Niederle and Rustichini (which have been tried and tried again by different scientists with the same result) when given a certain task, men and women have the same level of success. However as soon as a prize element is added to the task, meaning the possibility to win something, men start upping their game and increase their performance. Women keep performing at the same level. Say what? Women, we are not levelling up!
It gets even more crazy, the same experiment also found that women do not like competing against men. When tasks are given in single sex framework, the performance of women does increase when prizes are added. For men however, changing the game to a single sex competition does not change diddly squat. No effect...This means men actually perform better when they know they are competing against women.

Again, why? Is this biological? Cultural? Internal? External? What is going on?

To conclude, culture is important. The way our societies treat masculinity and femininity, changes the way women and men conduct themselves.

Masculine vs Feminine
And it starts at birth; we do not even realise it. Different experiments show that babies can see gender stereotypes as early as 18 months old, finding, for example, men wearing lipstick laughable. At two years old most children will give stereotypical answers to gendered questions (advocate.com). In Western society feminine is seen as powerless, small, contained, accepting, following. Masculine is seen as dominant, powerful, knowledgeable, strong. Different lists of attributes exist at an implicit level. We have seen this as recent as the way the media has changed their reporting from sport achievements and family life to the dress worn that night in the transition of Bruce to Caitlyn Jenner so aptly called out by Jon Stewart.

The more I was treated as a women, the more woman I became. I adapted the willy-nilly. IF I was assumed to be incompetent at reversing cars, or opening bottles, oddly incompetent I found myself becoming (Jan Morris on his transition from man to woman in C. Fine).


To paraphrase an article on Boundless.com:

Men and women see stereotypes and we apply them automatically. We unintentionally respond to people in ways that elicit from them the very behaviours that confirm our stereotypes. We ask harder managers questions to women than men.

But to win a coffee competition, you need to be seen as knowledgeable and, to a certain degree, powerful and dominant. The problem is that a female Barista can be seen as unlikable when showing her knowledge and leadership, because they violate norms of female niceness. And they can be judged this way by both men and women. I have experienced this more often than not myself.
Not too long ago, when I was training a competing Barista, a male friend of this Barista thought of me as being a very disapproving and condemnatory person in general, while all I was doing was training and guiding a person to a better performance. The Barista herself did not find me disapproving at all, by the way. Often, having a strong opinion, as a women, means you are the Bitch.

Back to the World Barista Competitions
So how do you win a competition as the World Barista Championships, where presentation and knowledge are so important? The score sheets are about as objective as they can be, and becoming more so all the time, but the innate way judges look at a female or male competitor is nearly impossible to change. It would be very interesting to compare videos of female and male competitors, and making notes not only of the information they share but also their body language and then comparing scores given for presentation across the board.

To summarise
All in all we can say women are less likely to compete than men. And if they do, their performance is less successful in a mixed-sex setting. However, this seems to be culturally bound. Meaning women struggle with internal and external cultural influences when competing in coffee competitions.

Changing the game?
Does this mean we should change the game? For example, remove time constraints? Or create a female only competition? Should we take presentation out of the game and only taste the coffees blind?
As a feminist myself, I do not really like these options. Because I believe it does not solve the underlying issue. All it will do is create a bigger gap between men and women on the cultural level. However at the same time, female competitors and all judges should bare in mind that there are invisible powers at play.

Most of the literature used can be accessed for free online. The literature mentioned, plus more can be found below.

M. Niederle, L. Vesterlund (2007) Do Women Shy Away from Competition? Do Men Compete Too Much? The Quarterly Journal of Economics

C. Fine (2010) Delusions of Gender: How Our Minds, Society, and Neurosexism Create Difference

L. Wade (2013) Gender and the Body Language of Power societypages.org

B. Reskin, D, Bielby (2005) A Sociological Perspective on Gender and Career Outcomes Journal of Economic Perspectives

W. Bönte, M. Jarosch (2011/2012) Gender Differences in Competitiveness, risk tolerance, and other personality traits: do they contribute to the gender gap in entrepeneurship? Schumpeter Discussion Papers

http://freakonomics.com/2013/02/24/women-are-not-men-a-new-freakonomics-radio-podcast/ (hear U. Gneezy explain his research into cutural differences in this podcast.)