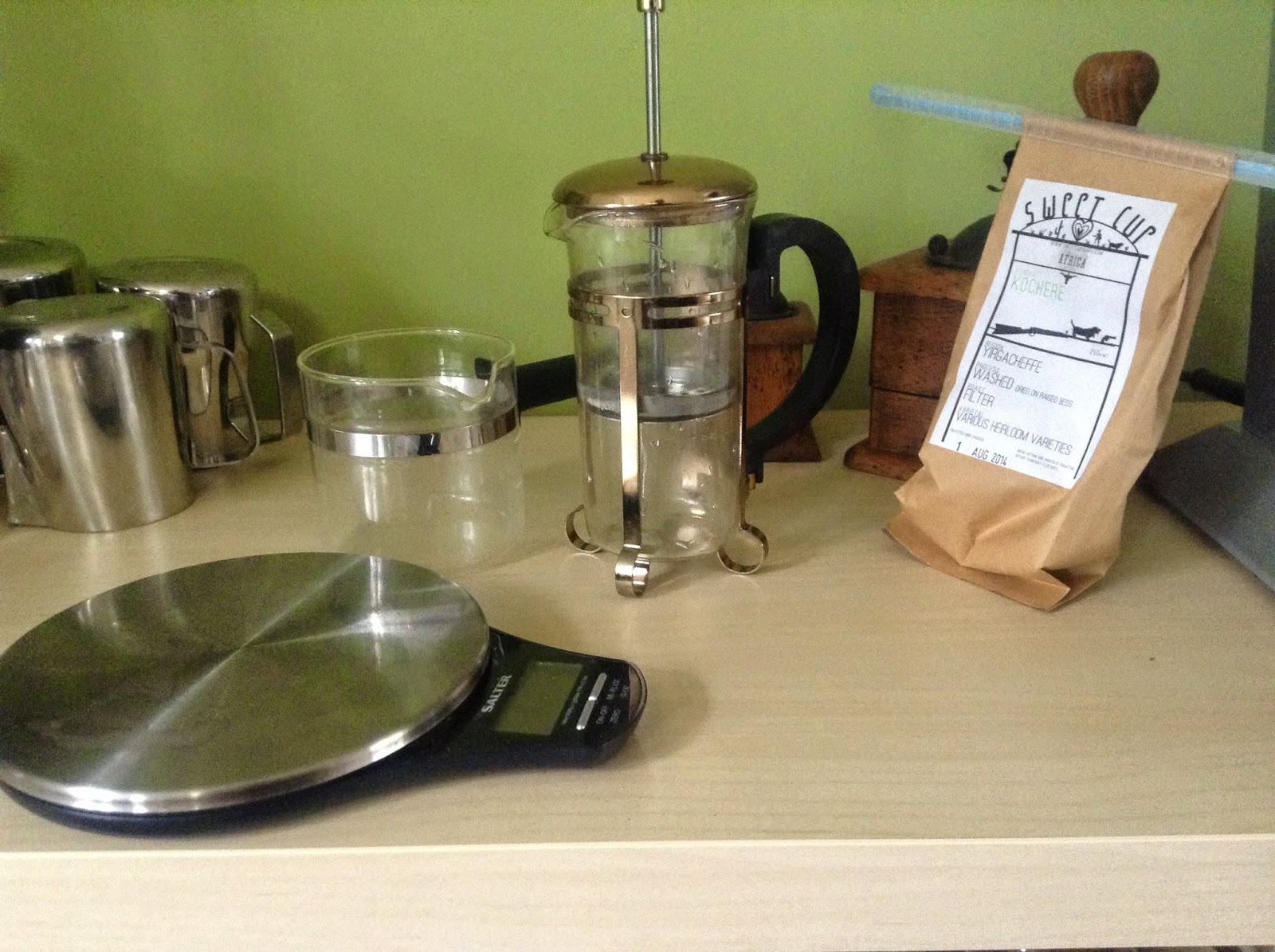 The French Press is probably one of the best known brewing systems. Still a lot of people do not know how to get the most out of this simple method. The biggest mistake? Not decanting before consumption. Below a short tutorial on how to brew coffee with a French Press.

First of all, a short history. The French Press was first patented by Italian designer Attilio Calimani in 1929. So the thing as been around for some time. It is also known as a press pot, a coffee press, a coffee plunger and a cafetière (à piston) and it can be found in almost any cooking store or warehouse.

The nice thing about the French Press is that you can brew a very full bodied coffee that comes very close to the flavour one gets from coffee cupping.

So how do you brew a French Press, cupping style?

If you would rather see a shortened tutorial in video format, check out the CoffeeStrides channel on Youtube.

What will you need?

- 6 grams of coffee per 100 ml of water (check how much water your French Press holds)
- filtered water
- kettle and pouring kettle
- precision scale
- grinder
- timer
- spoon or ladle to stir, preferably not metal
- server for decanting

step 1
Pick your coffee. For filter or slow coffee, always choose a light to medium roasted coffee. This time I went for the Kochere by Sweet Cup. Weigh out your coffee (6 grams per 100 ml of water).

step 2
Grind your coffee very coarse. As you will have quite a long extraction period (contact time) you need a coarser ground bean to compensate. Also the metal filter will not filter out any grounds that are too fine. Some ground coffee will always come through though, resulting in some sediment at the bottom of your cup. 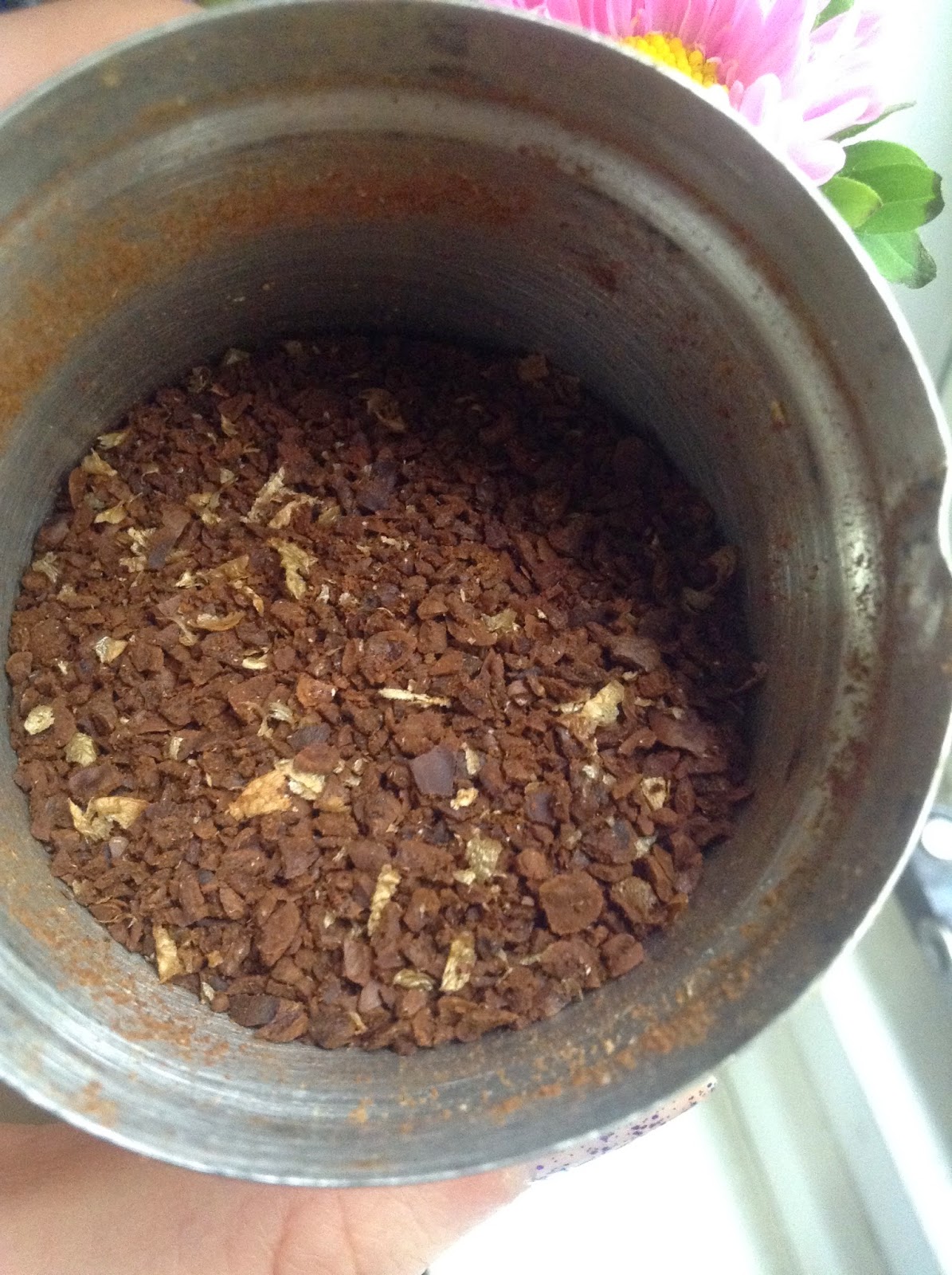 step 3
Boil some filtered water. The best temperature, depending on personal preference lies between 75 and 96 degrees Celsius. Not sure what to try first? Cutting the argument a bit short; colder brew will give a little more acidity. I went for 85 degrees Celsius.

step 4
Add the ground coffee to your French Press and slowly add the water in circular movements, making sure all grounds are wet. Start the timer as soon as you start pouring. Leave for 4 minutes. If you are scared your coffee will cool too much, carefully put the lid of the French Press on top, without plunging down. 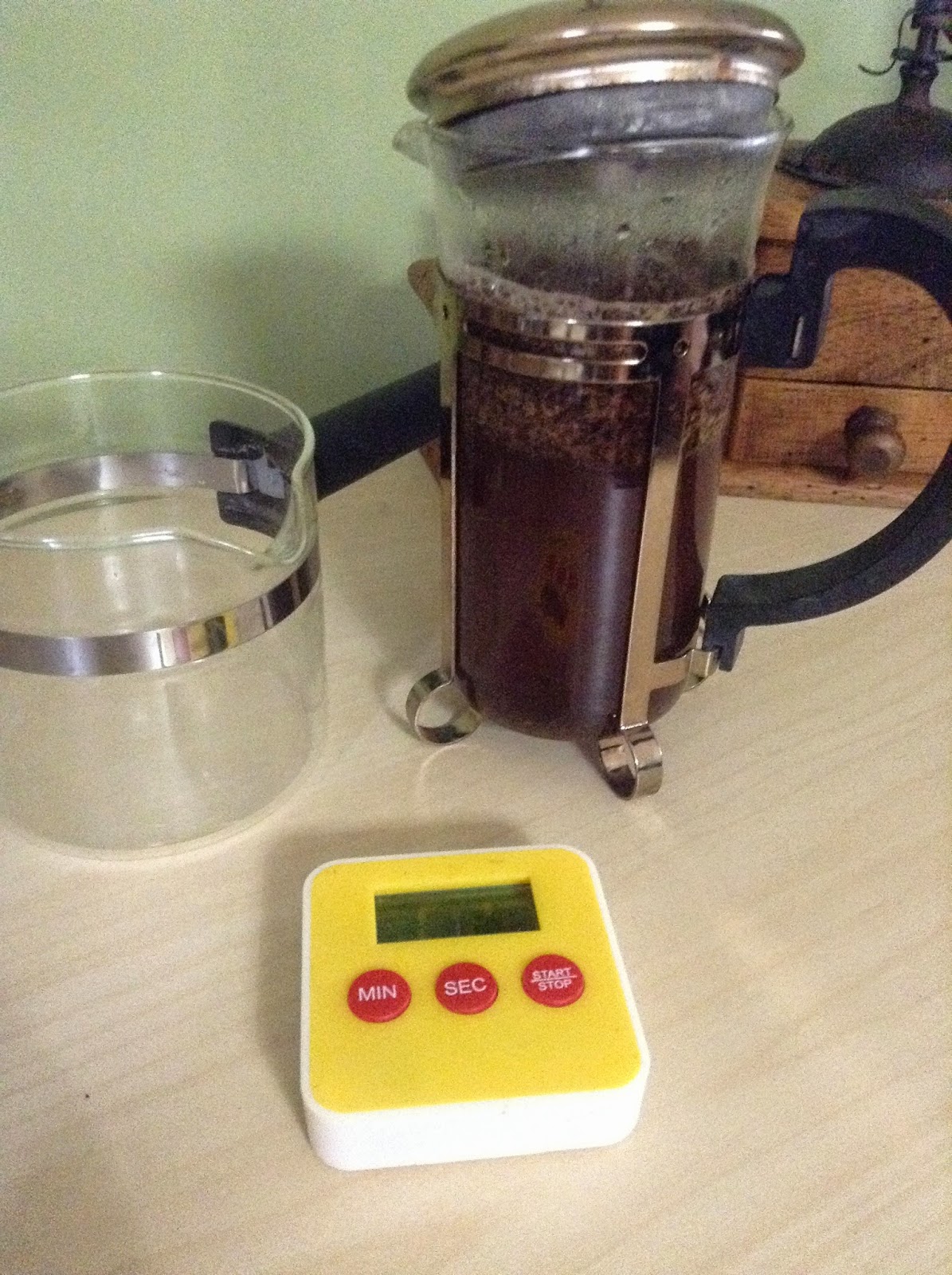 step 5
After 4 minutes take of the lid and slowly stir back and forth through the coffee crust on top with a ladle. If you can, use heat resistant plastic or non flavour adding wood, as metal can potentially break your glass French Press. The crust should be broken in 3 to 4 stirrs. 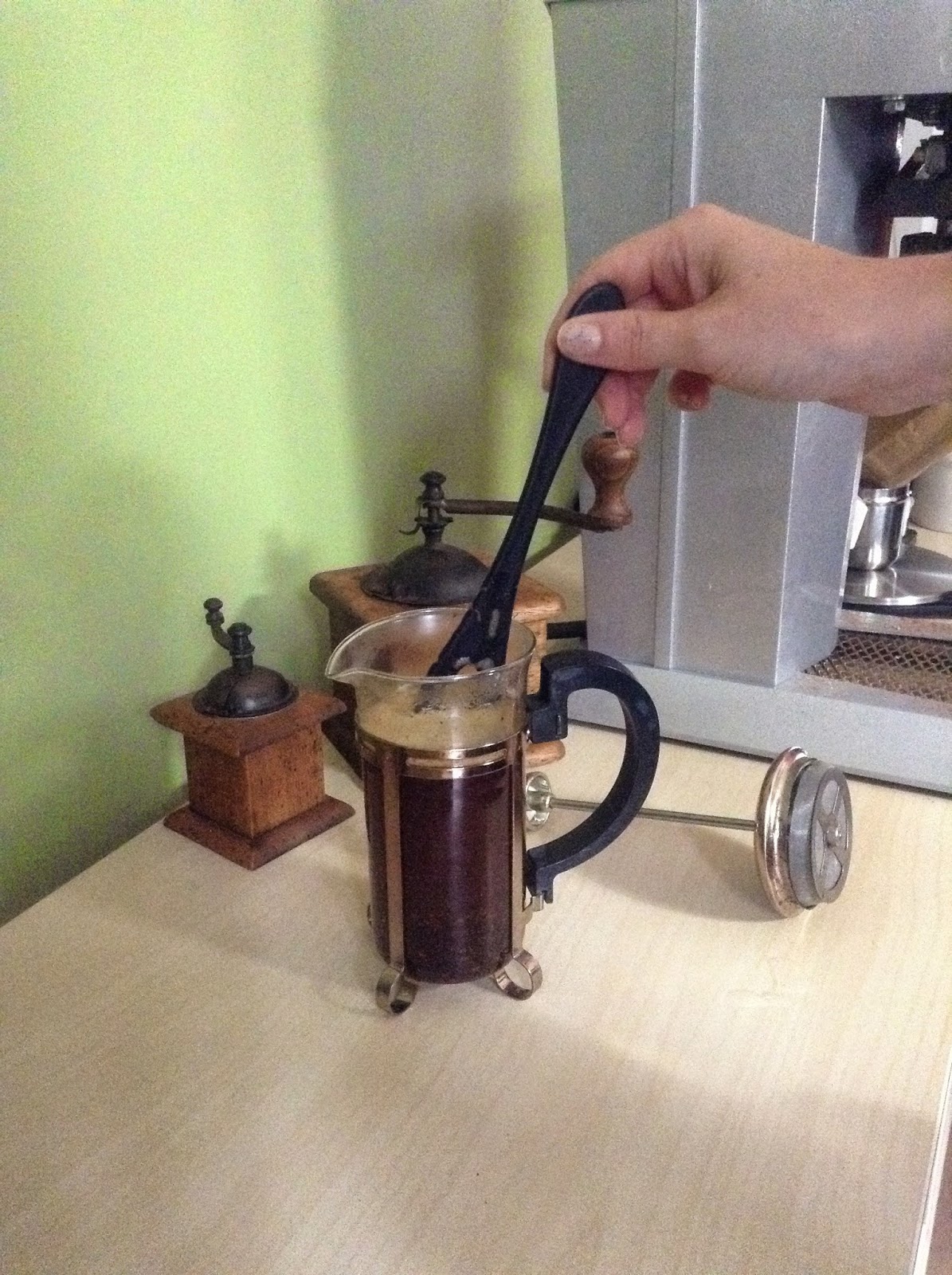 step 6
After the crust has broken down, put the lid/plunger on top and slowly plunge down.
step 7
After you have plunged the plunger down, decant. Why? Many a person pours out a cup or two and leaves some coffee in the French Press. When the first cup is finished, they pour out a second cup. However, if you leave any brew in the French Press, because the metal filter does not completely separate the brew from the grounds, you will keep extracting flavour. Meaning your second cup will be much more bitter. Plus, to ensure that everybody that you are serving has the same taste, you will need to decant and not directly serve into several cups. Before serving into the cups, swirl your server and pour. 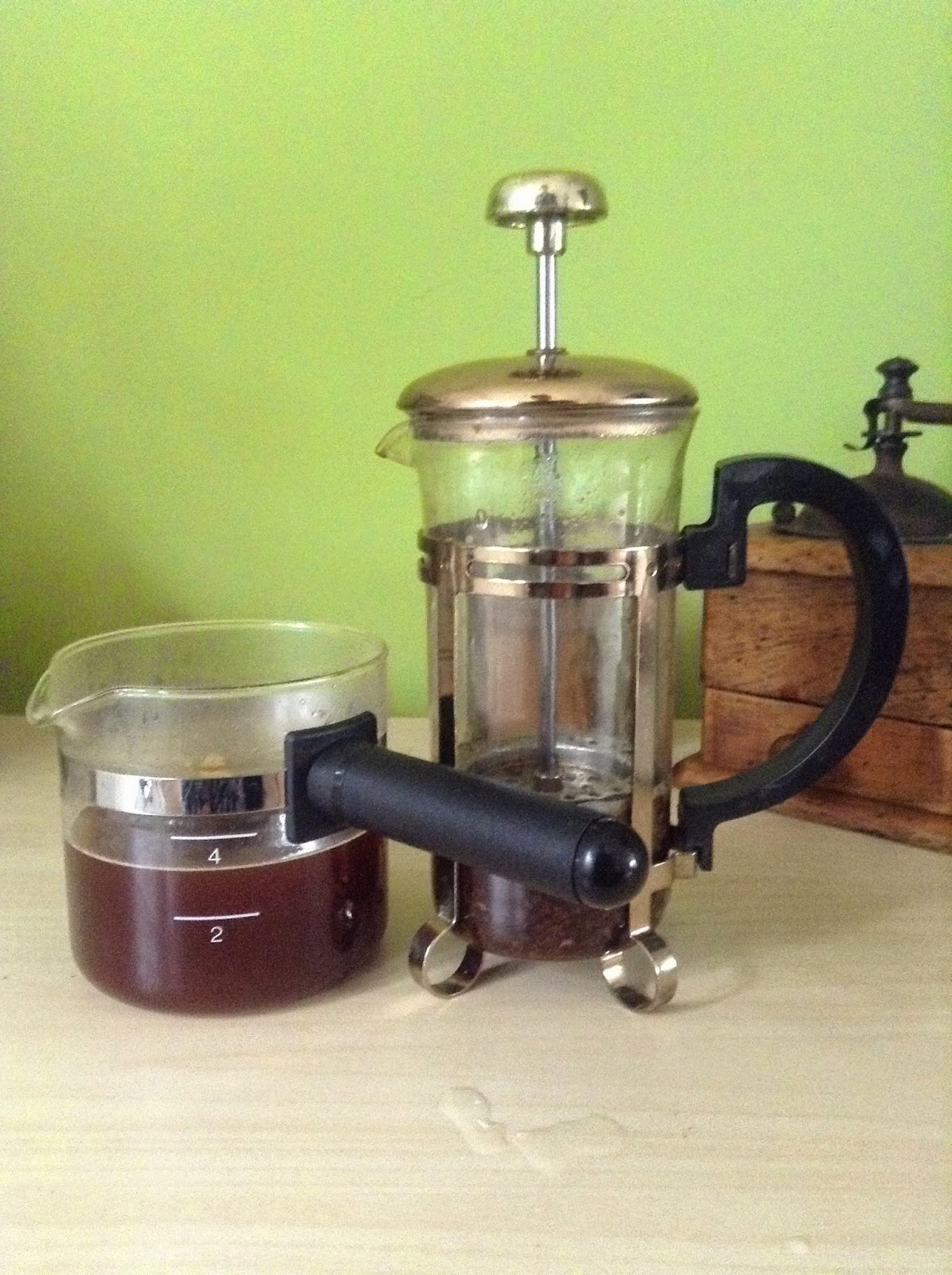 step 8
Enjoy your coffee. Perhaps with some home made banana bread? 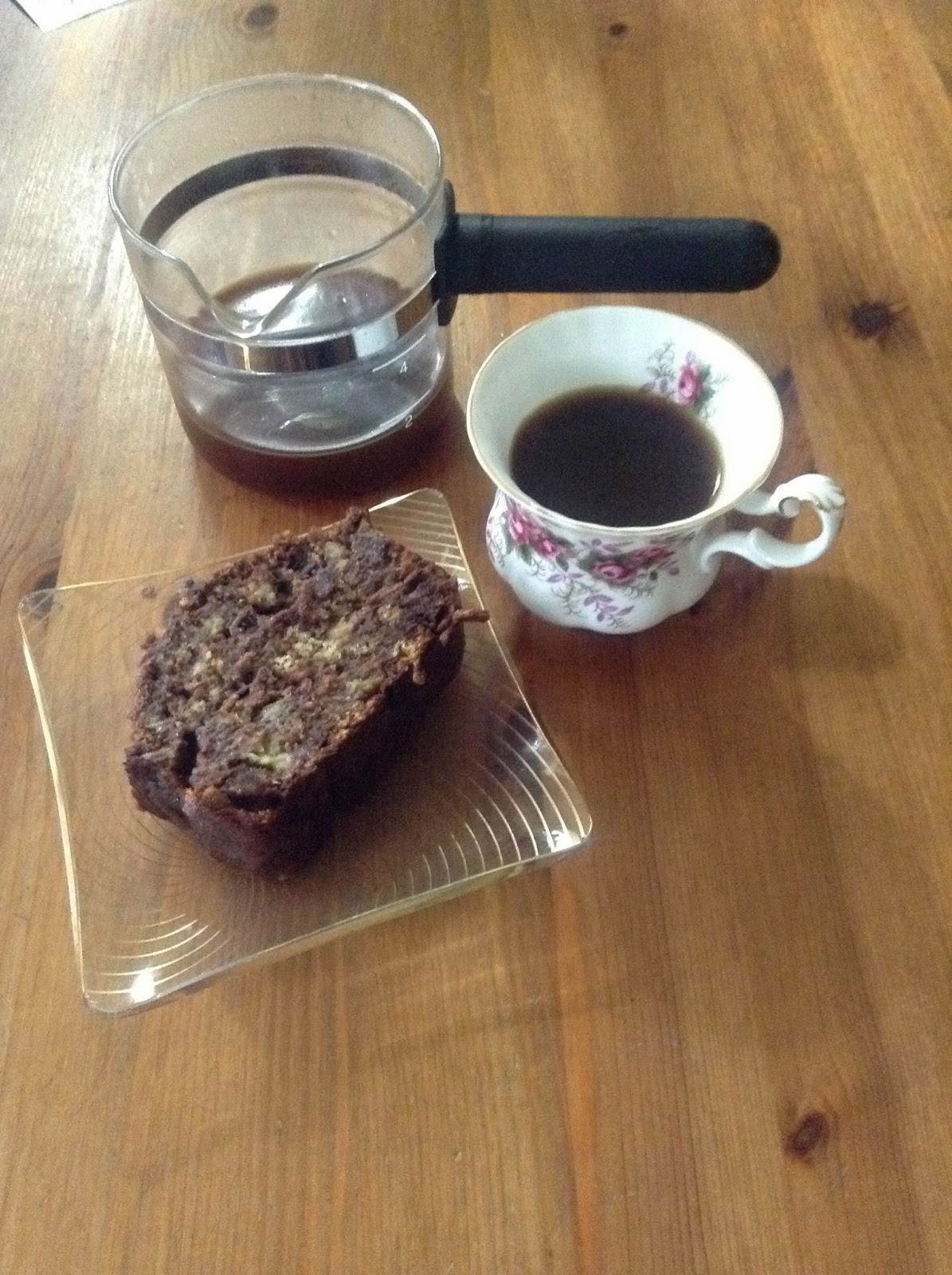